Allergy is an abnormal reaction or increased sensitivity to certain substances. The allergic individual produces symptoms when exposed to these substances, which are harmless to non-allergic people. The main reason for this is that allergic people make a special type of antibody called immunoglobin E (IgE), which can react with environmental substances in harmful way. These substances which lead to secretion of IgE antibodies are called allergens. The reaction between allergen and IgE antibodies causes the release of substances such as histamine, which produce allergic symptoms in the skin, the nose, the eyes, the chest, etc. 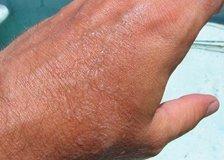 The most common allergens are animal dander, pollens, house dust, house mites, moulds, some drugs, and many food stuffs, especially fish, eggs, milk, and nuts. Bee and wasp stings may cause allergic reactions, with fatal results in rare cases. Additionally, feathers, wood, dyes, cosmetics, and perfumes may act as allergen.

Allergic reactions or diseases may involve any part of the body; the most frequently involved are the nose and the chest with resultant symptoms of hay fever, or asthma, respectively. The skin eyes also commonly show allergic symptoms. Anaphylactic shock is a severe allergy, which affects many organs at the same time causing a rapid decrease in blood pressure, fainting and occasional death.

Blood test- to detect the presence of IgE antibodies in the blood patch
Skin patch test – performs especially in cases of eczema
Skin prick test – the test involves using a small needle to prick a drop of fluid. Containing a known allergen just under the surface of skin, if there is reaction, it means test is positive and if skin does not react in any way this will indicate a negative result.

Homeopathic treatment of allergy – Homeopathy is one of the most popular holistic systems of medicine. The selection of remedy is based upon the theory of individualization and symptoms similarity by using holistic approach. This is the only way through which a state of complete health can be regained by removing all the sign and symptoms from which the patient is suffering. The aim of homeopathy is not only to treat allergy but to address its underlying cause and individual susceptibility. As far as therapeutic medication is concerned; several well-proved remedies are available for homeopathic treatment of allergy that can be selected on the basis of cause, location, sensation, modalities and extension of the complaints. For individualized remedy selection and treatment, the patient should consult a qualified homeopathic doctor in person. Few important remedies for the homeopathic treatment of allergy are given below: